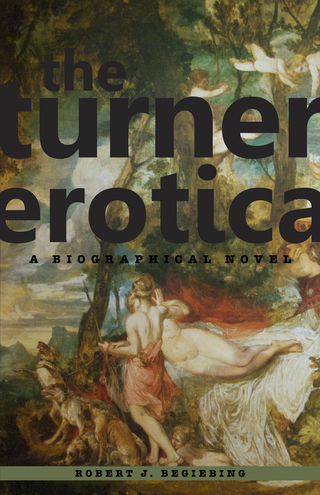 J. M. W. Turner (1775-1851), the greatest British landscape painter and one of the most revolutionary influences on Western art since the eighteenth century, left upon his death a rich and varied legacy to Britain’s National Gallery, including more than 19,000 sketch studies containing considerable erotica. When John Ruskin, Turner’s greatest supporter at the time, discovered the erotic works, he, with the help of National Gallery Keeper Ralph Wornum, burned most of the material they found offensive. The Turner Erotica follows narrator William James Stillman (the young American artist, Consul to Rome and Crete, friend of Ruskin, and acquaintance of Turner) as he pursues a dangerous quest across Britain, Europe, and New England to discover and save the few remaining studies that through theft and betrayal escaped Ruskin’s outraged fire. In his quest, Stillman enlists the help of Pre-Raphaelite William Rossetti, the liberated American painter Allegra Fullerton, and Sir Richard Burton (the greatest linguist, swordsman, pistol-shot, and covert agent for the British government in the 19th century). Stillman’s obsession with the surviving erotic studies arises out of their potential value to British art history and his deep sense that the studies contain a secret clue to the master’s celebrated body of public work.

The Turner Erotica(2013)
"Begiebing's artistry is all the more appealing for the ease in which The Turner Erotica makes what is long past feel as close as yesterday, bringing its people and their passion into a most compelling contemporary focus."--Provincetown Arts
The Strange Death of Mistress Coffin(1991, 2012)
“Just imagine Peyton Place as Hawthorne might have written it.” --Booklist
The Adventures of Allegra Fullerton(1999)
“Art, philosophy, religion, slavery, sexual propriety, suffrage—all are addressed with candid clarity... Highly recommended.” --Library Journal, starred review
Rebecca Wentworth's Distraction(2003)
“…The best university press novel of 2003 to make the rich history of America accessible to the educated general public.” --Langum Prize for Historical Fiction Prize citation